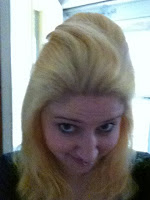 a friend of mine ordered some of those hair bumpits... Of COURSE, I had to try them out. :)
hahahahha, it's a crappy quality pic, but still makes me giggle EVERY time I see it. 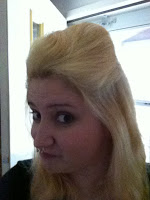 It's just funny right?!
Anyway, in other news, we've seriously been packing and cleaning. We rented a Rug Dr. Spent $60 on that bad boy only to find out that it had to be returned by 12:45 the next day. After we left there, we stopped to stock up on energy drinks. From 5pm to 3am we were up packing and cleaning and vacuuming and shampooing. And our poor carpets still have red stains. ((much thanks to this kid I babysat for a few months... his dad thought it'd be smart to drop him off with red kool-aid in a SQUIRT bottle.... the damage was done before I could even take the juice away...needless to say, after that day I always swapped his orange/red/purple juice for water or clear juice in a NORMAL sippie. *sigh*))
So for a whole minute, our house was clean... we've packed up most of the kids' toys and hidden them in the garage til moving day. We kept our a few of Handsome's trains and cars, and a few of my princess' dolls and what not... we also kept out the crayons. **sigh again**

This is my wall. :-/
Thank God for magic erasers!!
Anyway, after I discovered the crayons, I "built" a fort out of some of our giant moving boxes. And told them THAT is where they color. They've had a blast. This pic is me and the princess hiding in the box from daddy and bubster. Ha. I later jumped out and scared the crap out of both of em. It was quite HILARIOUS!! ((Hubby didn't think so))

Also wanted to share:: MY KIDS LOVE BROCCOLI!!! Seriously, I said "ok, break time, let's have a snack" and brought em juice boxes and this plate of broccoli and ranch, I had to make a SECOND plate!! YAY! :)
(Keep in mind when viewing these pics, HOUSE IS A DISASTER-MOVING)

((I meant to post this DAYS ago, but my laptop crashed AGAIN **rolls eyes**, but it's back and yay))

I'm thinking of doing a foodie post something or other.... A friend of mine does a recipe blog, and I've thought about it for a while, but I think I might just take this Foodie Friday idea and do a Tasty Tuesday, or something like that..... Yea.... hmmm. Thoughts?! 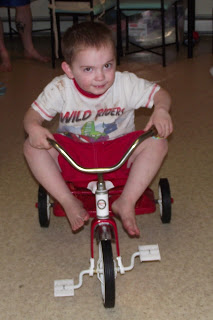 Mr handsome loves his bike. :) Ignore the FILTHY outfit, we'd just gone to the park and had ice cream. 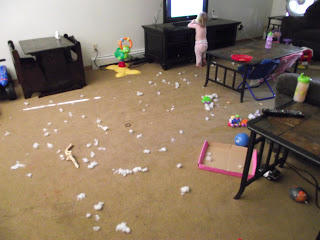 This is after my children discovered a hole in one of their balls. *sigh* :/ 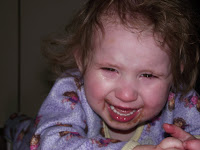 Today in the Mack house, Mrs drama queen decided to unleash her inner drama.... This is her laying in the floor screaming bloody murder!! 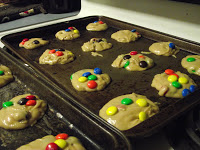 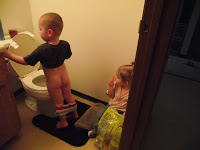 A few days ago while Mr. Handsome took a pee, Ms Dramatic followed him in there, sat on the little potty and said "poo" haha.

And here are the heart shaped glass I promised. Ms Dramaqueen herself. ((How cute is she?!?!) They were having a tea party-hence the cup! :)

Not much to post on really, other than the pictures. Been packing and cleaning. (getting ready to move on base, THANK GOD!)